Amendment C231 to the Whitehorse Planning Scheme proposes to rezone three properties located at 34-40, 37-43 and 42-50 Moore Road, Vermont from the General Residential Zone Schedule 5 to the Neighbourhood Residential Zone, Schedule 3.

The three properties are located at the southern end of Moore Road, Vermont and were formerly part of the Healesville Freeway Reservation (HFR) owned by VicRoads. In 2009, the HFR land between Springvale Road and Boronia Road was declared surplus to the road network requirements.  While most of the land in the HFR will become public open space, these three properties were sold by VicRoads and are now privately owned.

In 2014, the Minister for Planning rezoned the three properties to the General Residential Zone Schedule 5 (GRZ5). This occurred as part of the wider introduction of new residential zones across Victoria that replaced the previous residential zones.

The residential land outside the HFR and surrounding the three properties was identified by Council as an area for limited change under the Whitehorse Housing Strategy 2014. Residential areas classified as limited change represent the lowest scale of intended residential growth and have specific valued characteristics, such as environmental and heritage, that are to be protected. In accordance with this classification, the surrounding land outside the HFR was rezoned to the Neighbourhood Residential Zone in 2014.

The three properties mentioned above, and all other land in the HFR was excluded from the Whitehorse Housing Strategy 2014 and associated Neighbourhood Character Study 2014, due to the separate State Government process that was being undertaken at the time for the HFR land. The State Government has advised that these properties will not form part of the future public open space corridor that will be delivered along the majority of the former HFR. As a result, Council has initiated this Amendment to ensure that the residential zone applying to these three properties aligns with Council’s vision for housing in this area.

Where does Amendment C231 apply?

The amendment applies to the following three properties, as shown on the map below: 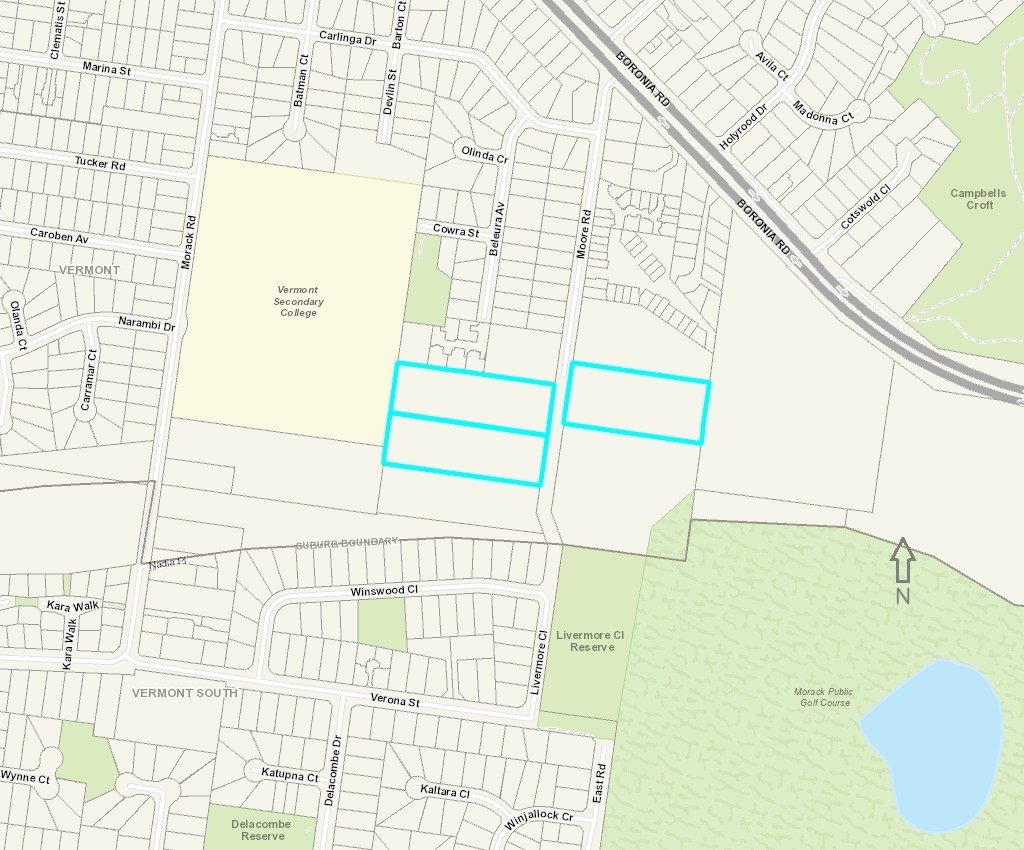 Landowners can identify the zoning and overlays that apply to their own land at Whitehorse Maps.

What does the Amendment do?

The Amendment rezones 34-40, 37-43 and 42-50 Moore Road, Vermont to the Neighbourhood Residential Zone, Schedule 3.  The Amendment also makes minor changes to the Housing Framework Plan to include the entirety of these three properties in the limited change area and to the Neighbourhood Character Precincts plan to include the three properties in the Bush Suburban 9 precinct. The Bush Suburban 9 precinct is one of the municipality’s 26 neighbourhood character precincts, and is characterised by an area that features tall canopy trees and native shrubs, informal and open streetscapes and modest dwellings that are set within bushy landscaped surrounds.

What are the key differences between the existing and proposed controls?

Where can I view the amendment documents?

The proposed amendment documents can be downloaded below.

Have Your Say on Amendment C231

Have Your Say on Amendment C231

Council invites submissions on the proposed changes to the zoning of the properties. The submission period closes Monday 20 September 2021.

Once the submission period has closed, Council will review all comments and determine how to proceed. If there are submissions that Council cannot resolve, Council will request the Minister for Planning to appoint an independent planning panel to review the Amendment and hear all submissions.

The independent panel will make recommendations in a report to Council. Council will then consider the Panel report and determine whether or not to adopt the Amendment.

If Council chooses to adopt the Amendment, the next step is to request approval from the Minister for Planning.

If you have any questions about the Amendment please contact Council’s City Planning and Development Department on 9262 6303.