A storm is a bad weather event that can come with heavy rain, strong winds, hailstones, thunder and lightning. Storms can happen anywhere, at any time of the year, and they can cause flooding and damage to property and injuries to people.

Floods can affect part or all of your property and they can result in loss of life for both people and animals, and

Flash Flooding is caused by a large amount of rain falling in a small area that causing storm water drains to overflow.

Riverine Flooding is where water flows above the banks or sides of the stream or river. Riverine flooding may go back to normal levels quickly but it also can take months. As the water moves down the river it may cause flooding in other areas days after the rain.

Warnings are issued when an emergency is likely to impact you. They tell you how bad the emergency is. The

warning system provides you with as much information as possible to help you make good decisions to protect yourself and your family.

Flood Watches, Flood Warnings, Severe Weather Warnings and Severe Thunderstorm Warnings are issued by the Bureau of Meteorology (BOM). The State Emergency Service (SES) will provide information about how the floodwater might affect people and properties.

Do not wait for an official warning to act. Put your emergency plan into action.

How you will be warned

Weather forecasts can tell you that a storm is coming ahead of it happening, this helps you to prepare. 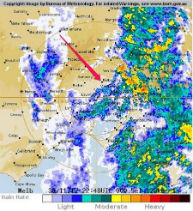 You can check the weather forecast on the Bureau of Meteorology website.

Weather forecasts on the television, newspaper tell you when a storm is likely to happen and how bad the storm will be.

You can find out if there is a fire, flood, storm or other emergency by:

During large emergencies you may receive:

Before a Storm or Flood 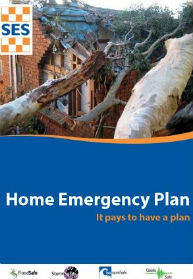 plans and property. If you live in an area where flooding occurs regularly you should:

Preparing your home or business

If you think your home or business will be flooded:

Be ready to evacuate. Act early as conditions can change quickly and roads can be blocked. You should take any medication you or a family member needs as well as your pets with you.

Be aware of thunderstorm asthma. If you have asthma always carry your blue reliever with you. If a person in your family has asthma, be aware of the signs of worsening asthma and the asthma first aid steps.

When a storm arrives 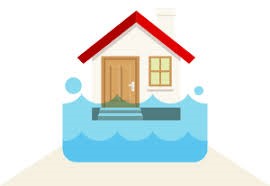 Never walk, ride or drive through flood water. Don’t play or allow others to play or swim in floodwater

After a Storm or Flood

Inspecting your property for damage

In a storm, damage can be caused by flood water but often it is from: 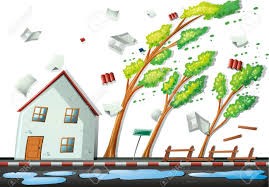 When returning to your home after a flood, take precautions to reduce the possibility of injury, illness or disease. Before going onto your property:

On site hazards may include:

Refer to the Recovering From An Emergency section of this web site.

After a flood, throw away: 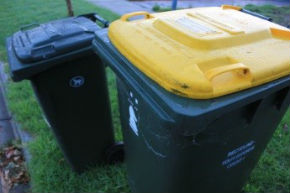 To clean cans that are sealed, not bulging and intact which have come into contact with flood-water:

If the power is on, refreeze or cook food that has thawed but contains ice crystals and is below 4 °C. If the power is off, store food safely by keeping the refrigerator and freezer doors closed as much as possible. Add a block of dry ice to your fridge if the power is likely to be off longer than four hours. Always wear gloves when handling ice.

Local water authorities will advise you if the tap water is safe for use.

pets away from sewage-affected areas until it has been cleaned up.

Mould and your health

Mould is a type of fungi that lives on plant and animal matter. Mould grows best in damp and 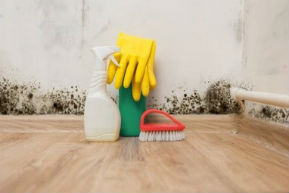 poorly ventilated areas; it reproduces by making spores. When airborne mould spores land on damp spots indoors, they may begin to grow and spread.

Mould is not always easy to recognise. It often looks like ‘fuzz’ or appears to be a stain, smudge or discoloration.

The most common moulds are black, green or white. However, mould can be many other colours ranging from grey to orange to brown.

High mould levels are likely if the house has been flooded for more than two days.

The key to preventing mould growth is to clean up and dry out the house as quickly as possible (within 48 hours).

Before you plan your clean-up, remember that not everyone is suited to working in damp, potentially mouldy conditions.

Animals are affected by storms and floods. To keep them safe, pets should be moved inside 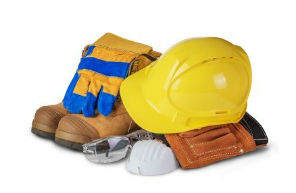 where possible during a storm.

In the event of flood warning, pets should be evacuated with the family.

When returning to a flood-affected area remember that wild animals, including rodents, snakes or spiders, may be trapped in your home, shed or garden. Be careful.