Elm trees form an important part of the City of Whitehorse urban forest and have been planted on both private and public land. These trees can very quickly become infected by elm leaf beetle which can weaken the health of an elm tree and it may never recover.

The elm leaf beetle was first discovered in Melbourne on the Mornington Peninsula in 1989 and quickly spread to the inner city suburb of East Melbourne. By 1994, the elm leaf beetle established itself throughout the eastern suburbs, including the City of Whitehorse. Council is responsible for 400 elms planted in reserves and as street trees. There are many more elms planted on private property, especially the popular Golden Elm.

Beetle larvae are yellow and dark brown and are evident on elm leaves from mid-October. They create a series of small holes in the leaves during October and November. They destroy all but the leaf veins, creating a ‘skeleton’ effect. 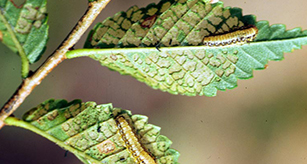 Trees affected by elm leaf beetles can become defoliated by mid-summer meaning there is no summer shade nor autumn colours and reduced energy reserves for next year’s tree growth. The larvae then move down the trunk during December and are visible on the ground below the tree.

Depending on the weather conditions, there may be up to three life cycles of the beetle in a single season. Repeated infestations and defoliation seriously weaken trees.

The insecticide Confidor can injected around the root zone of the tree where it is taken up by the roots and transported to the foliage. This is a safe and effective method of treating large trees. Based on overseas experience, the tree can be protected for more than one season. The best time for this treatment is September to November, although later treatments are effective provided soil moisture is not limited.

Carbaryl banding is easy to administer, uses small amounts of chemical and is effective at reducing the larval population of the elm leaf beetle. Carbaryl is a contact insecticide, widely used against many plant-eating pests.

A 2% solution (20 g active ingredient) is sprayed in a half-metre band around the trunk, at least 1.5 m above the ground.
Spraying is done monthly from November to January when there are mature elm leaf beetle larvae present. The spray is reapplied in wet weather conditions.

Again it is recommended residents seek a qualified commercial arborist to apply Carbaryl banding to their trees if they are unsure how to proceed.

Sticky tape banding is a non-chemical control which involves wrapping very sticky packing tape sticky side out around the trunk while the larvae are migrating. This is something a vigilant gardener could do to reduce the number of beetles laying eggs the following year and improve the health of the elm tree.