Easy Ride Routes will form a network of low-stress cycling routes across the City of Whitehorse. The aim is to encourage more residents to ride a bike for short, local trips.

Six priority routes ( PDF 3.56MB) have been identified that are easy and safe to navigate. The routes will use on road markings called ‘sharrows’ that encourage drivers to be aware of people on bikes and to help direct bicycle riders along routes that have low traffic volumes and speeds to make riding safer and more pleasant for everyone.

Construction of the Easy Ride Routes began in the May 2021.

The first route, East-West 6 (EW6 - shown in blue) runs through Burwood and Burwood East. This route was completed in in early June 2021.

The second route, East-West 2 (EW2 - shown in orange) runs through Box Hill North, Blackburn, Nunawading and Mitcham. The road markings for this route will be completed during June 2021, with signage to follow early in the 2021/22 FY.

The third route, East-West 4 (EW4 - shown in purple) runs through Mont Albert, Box Hill, Blackburn, Nunawading and Mitcham. The road markings for this route will be completed during June 2021, with signage to follow early in the 2021/22 FY. 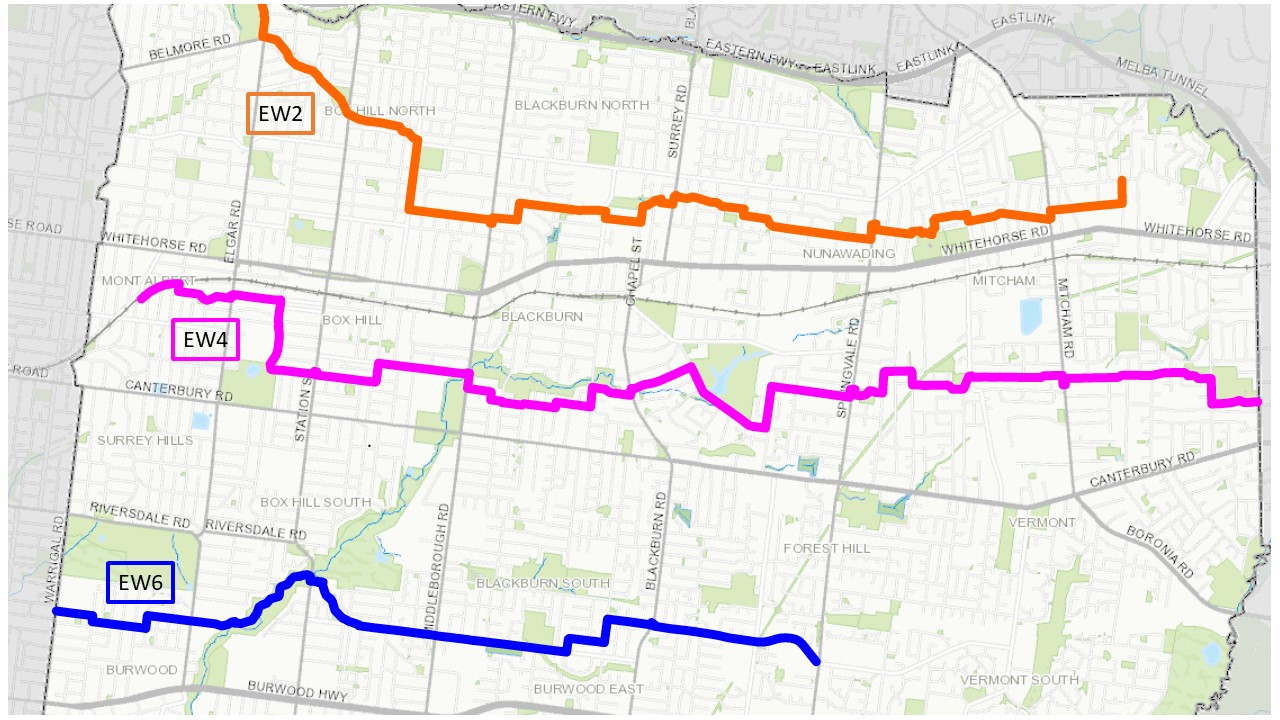 What are the different markings?

There are a few of different types of bicycle symbols that make up the Easy Ride Routes. Learn more about them below. 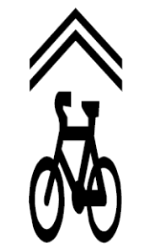 A ‘Sharrow’ is a road marking that encourages bike riders to move to the centre of a traffic lane and ‘claim the lane’.  These are installed in locations where the road narrows due to a traffic treatment like a roundabout or traffic island. It’s important for a bike rider to ‘claim the lane’ to prevent a driver from overtaking where there isn’t enough room, which could cause the bike rider to be squeezed off the road. 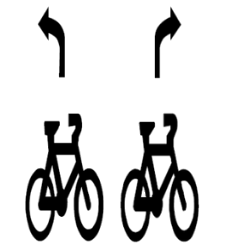 A directional marking is a bicycle symbol with a left or right arrow, indicating the route turns and helping bike rides follow the Easy Ride Route. 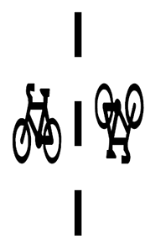 These are symbols are to remind drivers to watch out for bike riders along this section of road. They are placed near the centre of the road so that they are not covered by a parked car, or mistaken for an exclusive-use bike lane.

Many people think that riding a bike is only done by sporty people who are super fit and active.

Riding a bike should be seen as a simple and easy form of transport and which is convenient for short trips.

The development of the Easy Ride Routes is a key action from the 2016 Whitehorse Cycling Strategy. They are designed to make riding safer and more accessible for everyday riding.

The six prioritised routes seek to address this concern by responding to the following issues:

When implementing the routes, Council will install road markings and signage so that the routes are safe and easy to navigate