In 2012 Council embarked on a process to review the Whitehorse Housing Study 2003 and the Whitehorse Neighbourhood Character Study 2003. Land within smaller shopping centres was included in the review to ensure that the residential potential of the municipality was taken into account.

These housing and neighbourhood character studies are used by Council and the community as a guide to residential development in the city in line with community aspirations and the needs of the future population. The purpose of the Housing and Neighbourhood Character Review project was not just to assess where and how to place new development, it also sought to define the unique and valued characteristics of the municipality and implement specific planning tools to manage how Whitehorse changes in accordance with our community’s vision.

Council engaged expert consultants to undertake urban design, planning assessments and prepare the background and study documents associated with this project. The Whitehorse community was engaged at key stages throughout the process.

The review consists of three documents which were adopted by Council on 28 April 2014 and can be downloaded below.

The Whitehorse Neighbourhood Character Study 2014 identifies and evaluates the urban and environmental elements that contribute to Whitehorse’s character and provides direction for future development of residential areas in the municipality. Three character types have been identified, as follows:

Detailed character guidelines can be downloaded below.

The Whitehorse Housing Strategy and Whitehorse Neighbourhood Character Study 2014 were used as the basis of Council’s distribution of the State Government’s new residential zones. Council prepared a Draft Residential Zones and Schedules ( JPG 344.83KB) and Amendment Documentation ( PDF 2.17MB) to support a planning scheme amendment request to the Minister for Planning. These were approved (with changes) by the Minister for Planning in October 2014. Amendment C160 provides more information about the new residential zones in the municipality.

Please use Whitehorse Maps to find out which neighbourhood character type, planning zone and overlays apply to your property.

History of this Review 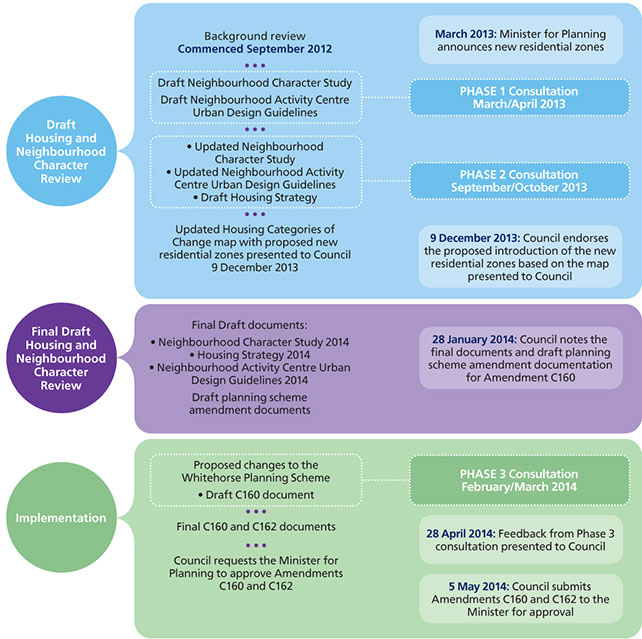 Stage 1: Background Review
The background review analysed all relevant information, policies and changes since the original 2003 studies and looked at the demographics of Whitehorse, future population projections and recent development trends.

Phase 2 Consultation on the three draft documents occurred in September/October 2013. Council received over 950 written submissions and more than 250 residents had registered to be kept informed about the project at this point in time. A list of all the main points raised in the submissions can be accessed here:  Phase 2 Consultation Summary Response to Submissions

Stage 5: Implementation
Phase 3 consultation took place between 14 February and 14 March 2014 and Council considered the feedback provided by the community at its meeting on 28 April 2014. At this meeting, Council adopted the proposed Amendments C160 and C162 and finalised the three background documents comprising the Housing and Neighbourhood Character Review.

This decision concluded the Whitehorse Housing and Neighbourhood Character Review 2014 and adopted the translation of residential land into the State Government’s New Residential Zones.

The Minister for Planning approved Amendment C160 (with changes) on 6 October 2014 and the new residential zones came into effect on 14 October 2014.

Council would like to thank everyone who contributed submissions and feedback in preparing and undertaking the Whitehorse Housing and Neighbourhood Review.